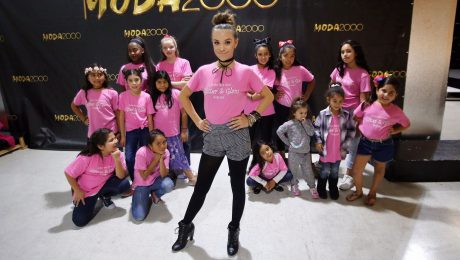 Anika Ortiz was 7 when her older sister was murdered — a victim of domestic violence.

Since then, the tragedy has morphed into something else: an inspiration.

Anika, now 14, is on a mission to do her part to help victims of domestic violence and bullying.

“As long as I see domestic violence in the world, this is going to be my mission and my calling,” said Anika, who lives in Orange with her family.

The tragedy left a desire for Anika and her mom, Maria, to help other victims. A few years later, a light bulb went on for Anika when she was cleaning out her closet to donate some clothes. It occurred to her she could do something that could help domestic violence victims.

She started inviting friends over to her house for a fun boutique and some hors d’oeuvres. Her mom contacted Mariposa Center, a local counseling and support organization for women and families, about donating to their group.

The CEO asked the Ortizes to come in for a meeting. Anika, then 10, arrived with a pink folder containing her mission statement, boutique information and general business plan.

“I was born with an entrepreneurial spirit,” she said.

The CEO offered a location to host her boutique.

Anika’s Pink Closet launched Jan. 30, 2015 with 300 in attendance. Mariposa continued to host the boutique of shoes, clothes and accessories every month that year.

Krista Driver, Mariposa president and CEO, said she was impressed with Anika’s business plan when she met her.

“It was pretty incredible,” Driver said. “Most adults couldn’t do a business case like that.”

Driver said Anika is the type of person whose mind-set is that nothing is impossible.

“She’s kind of the kid that finds a solution to a problem and then carries it through to success,” Driver said. “She’s just doing everything that she has set out to do.”

The boutique provided a forum for girls to come in, have fun and be themselves in a safe space. Anika remembered seeing girls walk in quiet and with their heads down.

“At the end, they were just so confident,” she said.

But she wanted to do more. It started with a friendship and confidence class she was allowed to offer at Mariposa, and she also started public speaking.

In 2016, Anika held a Young Entrepreneur Summit, where she taught 30 girls from ages 3 to 16 about how to start their own businesses.

Three of the girls are still doing their businesses, Anika said.

Among them is a girl who witnessed her mom stabbed to death by her stepdad, according to Anika.

“She had been in therapy for over two years and had never opened up,” Anika said of the girl, who became a regular at the boutique. “She started her own business. She’s seriously the most confident girl ever.”

The key to the programs’ success is that it’s peer-to-peer, Anika said. As a victim of bullying throughout sixth and seventh grade, she has plenty of her own stories to share.

“I was being told to kill myself every single day,” she said. “There are hundreds of things I can sit here and tell you that they did. It affects me every single day of my life.”

When her mom found out about the bullying, she took Anika out of school for homeschooling.

Anika holds no ill-will toward her bullies. On her last day before leaving school, she gave them both a gift from her boutique, because she understands everyone has their own battles they are fighting, including bullies.

“If I really were to see them, I wouldn’t say much,” she said. “Other than they seriously helped me launch something that’s helping hundreds of girls.”

Her current class involves putting on a winter fashion show for a local senior community on Dec. 9.

She will hold another Young Entrepreneur Summit next summer and she’s also working on a book: “My Secret to Success as an 11-Year-Old Entrepreneur.”

Her goal is to attend Harvard Business School and create an empowerment, entrepreneurship and anti-bullying program to take to schools across the country.