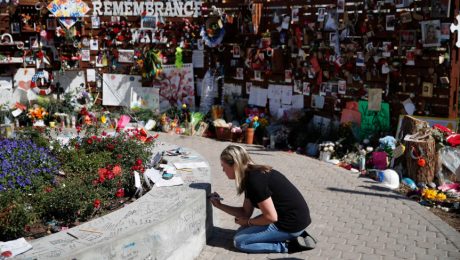 Mental health professionals can be thought of as the second responders after a crisis in the community: They help people deal with emotional and behavioral trauma that follows both natural and man-made disasters.

In the aftermath of the Route 91 Harvest Festival mass shooting in Las Vegas, a number of local counselors have stepped up to offer free services to survivors in Southern California – home to 23 of the 58 victims killed by a lone gunman and to many of the more than 500 injured.

Since the 10 minutes of terror on Oct. 1 at the outdoor country music concert, private therapists, counseling centers and government-funded crisis specialists around the region have been extending help on hotlines, in private sessions and through support groups.

Their focus has been on the thousands of Southern Californians who were in the audience that Sunday night when shooter Stephen Paddock, who later killed himself, fired high-powered weaponry from his luxury suite high up in the Mandalay Bay Resort and Hotel on the Las Vegas Strip.

One of those survivors, Patty Caretto Brown of Laguna Hills, was grateful she could share experiences in person with about 50 other concert attendees the Sunday after the shooting. The gathering was led by a local member of the U.S. Army who Brown said routinely deals with soldiers possibly suffering post traumatic stress disorder.

“The groups are very therapeutic, listening to other people’s stories and knowing where they were and where we were and how everybody was affected by the whole thing,” said Brown, 66, who attended the concert with her husband and son.

The three family members were separated in the chaos. Before the shooting began, Brown’s husband had gone closer to the stage. Brown and her son had stayed toward the middle of the crowd, and hid from the bullets beneath a table by a bar until there was a lull in the barrage.

“My son said ‘Mom we’ve got to run’ and when the shooter was reloading or whatever he was doing and there was a pause my son grabbed me and we stood up and ran out an exit.”

The two reunited with Brown’s husband later. All three were physically unharmed but Brown said they are suffering from mental anguish, like many of the other survivors she has connected with through virtual support groups on Facebook and those at the Huntington Beach gathering.

A feeling of survivor’s guilt weighs heavy on their hearts and minds.

“You know it’s very hard to deal with that we were survivors,” Brown said. “The other thing that’s hard to deal with is that we did not have the heroic situation or we weren’t injured or have a bullet wound, but we still are all survivors.

Some therapists and counselors have personal ties to the people and the place where the worst mass shooting in modern American history took place. Facebook and other social media outlets served as a means to reach out to larger numbers of those in need of support.

Stephanie Goldsmith, a licensed clinical psychologist with a practice in the eastern Los Angeles County community of Claremont, posted a message on Facebook Oct. 4 that said, in part, “Las Vegas is my hometown. I need to do something to help.”

Goldsmith said she received more than 50 emails and additional phone calls from Route 91 concert-goers wanting to attend a support group she’s leading for people in the Los Angeles area and the Inland Empire. Goldsmith said she had so many responses, she needed a bigger space for the survivors to meet. A church in town opened its doors.

At the first group meeting Friday afternoon, 50 people showed up. Goldsmith plans to continue them weekly through Nov. 17.

“People seem to be really grateful to have a place to come to and not go through this alone,” said Goldsmith, who lived in Las Vegas starting in middle school and graduated from UNLV.

It’s in the nature of mental health professionals to want to help people, and the proximity of the Las Vegas shooting and the number of Southern Californians who were there allows Goldsmith and other counselors in the area to respond directly.

“After something this horrible, it’s really wonderful to see people on their feet and mobilized to help,” she said.

An eight-week series of free group sessions that Mariposa Women & Family Center in Orange will start Wednesday night, Oct. 18, for survivors grew out of the response that poured into its director, Krista Driver, on her personal Facebook page and via emails and phone calls.

“I was overwhelmed by how many of my friends were either there or knew someone that was,” Driver said. “This has sent ripples through our community and I felt compelled to mobilize our resources to help these people.”

A nonprofit that has been in the community for 40 years, Mariposa sets aside a portion of its donations to maintain a scholarship fund to help cover free services. One Las Vegas shooting survivor who was referred to Mariposa will be getting one-on-one counseling with help from the scholarship fund, but with so many in need, the group sessions were necessary, Driver said.

As of Monday, 20 people had signed up with Mariposa, just about at capacity. Driver said more groups can be opened if needed and “if we get to eight weeks and they feel like they need more time, we’ll extend it.”

There also will be a separate group for adolescents.

“We’ve gotten quite a few calls for teens who were at the concert,” Driver said. “We don’t want teens and adults together.”

Phone operators at county-run mental health hotlines immediately stood ready to refer anyone in need of help to local resources and to the state victim compensation program that can provide financial assistance for mental health treatment and other services.

San Bernardino County, which suffered the trauma of the December 2015 terror attack at a training session for county workers in San Bernardino that left 14 people dead and 22 seriously injured, held an all-day drop-in clinic in Ontario the Saturday following the Las Vegas shooting.

A few days later, the Riverside County Mental Health Department held regional group sessions for survivors of the shooting on the same night in three different locations in Riverside, Indio and Lake Elsinore and 75 people showed up. Those Oct. 11 gatherings were only for people who had attended the Las Vegas concert. Separate groups were offered for those not at the concert but knew someone who had been killed or injured.

Men and women in their 20s to their 50s came to what are described as “critical incident debriefings” by psychologist Andrew Williams, mental health services administrator with Riverside University Health System-Behavioral Health, who led the group at a family wellness center in Riverside.

All but one person spoke up, with many of them saying it was the first time they had shared what they experienced outside of Facebook groups, Williams said, describing the gatherings as being more like triage than therapy sessions.

“The unique dynamic is these are complete strangers that don’t know each other but they feel completely unified and validated around each other,” said Williams, who in the past conducted similar debriefings for the survivors of the San Bernardino mass shooting.

The structured two-hour meetings provided a safe environment for survivors to share their experiences, to debunk myths about what happened and for mental health professionals like Williams to provide guidance on processing thoughts and emotions after a traumatic incident. Such reactions as nightmares, hyper-vigilance, trouble sleeping in the dark (because the shooting happened at night), and feelings of guilt are normal and even predictable, Williams said.

Initial shock can be followed by feelings of emotional numbness with no sign of anger or tears — a defense mechanism, Williams said — or a sense of helplessness, self blame, and physical symptoms that could include headaches, stomach aches, insomnia and loss of appetite. Some people might increase consumption of alcohol or turn to other drugs.

Coping strategies were discussed, along with providing resource information for those who may want or need clinical therapy services. Research shows that symptoms tend to dissipate on their own after two to four weeks, Williams said. But if they go beyond that and become intrusive in daily life, he recommends seeking one-on-one professional help.

The woman in his group who did not speak during the meeting opened up afterward, Williams said.

“She ended up staying behind, talking to and hugging others she didn’t know at all.”

Where to get help