The Amazing Benefits of Horse Therapy for Trauma Survivors 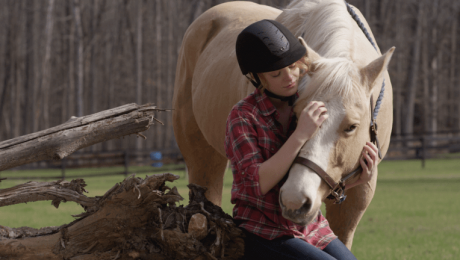 What is equine therapy?

When you pair a horse with a human, there is something magical that happens. I’ve been a licensed therapist for over 15 years and some of my best “work” has happened in an arena with a 1500 pound equine and a trauma survivor.

Equine-facilitated psychotherapy (interacting with horses) helps clients explore their feelings and work through communication challenges. This is a treatment that includes activities and/or an equine environment that promotes emotional growth in persons suffering from ADD, anxiety, depression, trauma, substance abuse and so much more.

I used “on the ground” therapy which incorporates a connection between troubled humans and highly sensitive animals. As prey animals, horses are hyper vigilant, constantly scanning their environment for potential danger. People who have experienced trauma can really relate to that.

Right after the Route 91 shooting in Las Vegas, Mariposa opened a support group for individuals impacted by that horrific experience. Initially, over 100 people responded to our groups. We were able to provide scholarships to everyone who attended the 8-week series (thanks to our generous donors) and many continued on with us; several are still with us today.

We initiated equine therapy in partnership with Kelley White for the Route 91 group and it has been perhaps the most effective therapeutic modality we’ve used with them. The clients responded so positively that we’ve extended their equine groups several rounds and we’ve begun inviting other clients out to join the horses.

I remember the first time we took some of the Route 91 clients out to the horses. The women were somewhat shy at first with the horses… unsure of themselves and how to interact with horses and they all stood back.

We turned out 3 horses in the round pen and asked the women to stand inside the pen quietly and let the moment fill itself.

It wasn’t long before the horses approached the women to introduce themselves. Over the many years that I have been doing this work, it never fails that the horse who picks the human (or vice versa) has a similar story or disposition as the one they choose. This time was no exception. Each woman was paired with a horse that shared some common experience or way of approaching the world. It was pretty amazing.

By allowing the horses into their space, the women established a bond that could not be replicated by another human. All of the horses we use have their own trauma and some have a lot of difficulty trusting humans. So, for them to initiate contact is a pretty big deal.

We started the first session with a simple grooming exercise so that the women could spend time having contact with the horses that was less threatening and more soothing. It also allowed the horses a chance to be touched and establish trust between them and their new friend.

I just stayed off to the side and observed the interactions and made sure everyone remained safe and engaged in the activity. One horse (Chance) has a terrible time relaxing and allowing anyone into his space. He’s afraid of his own shadow and rarely relaxes, constantly on alert. I looked over just in time to see him leaning into the brush and rolling his tongue (I have never seen a horse do that). He was so content and relaxed and really seemed to be enjoying the touch from the client. I was enthralled. Of all the horses, he was not the one I expected to see actually calm and zen-like. It was great.

A short time into the grooming exercise, the woman brushing Chance looked up, with tears in her eyes and she said, “I just realized that I don’t feel any anxiety. This is the first time since the shooting that I haven’t felt any anxiety!” She just stood there, with tears streaming down her face, hugging the horse who is afraid of touch (due to past abuse). Both of them were healing each other at that moment.

The Power of Equine Therapy

That is the power of equine therapy. Those two worked together for several months; the client was able to return to work and establish some semblance of normal in her life. Her husband and young children even joined her with the horses at one point. When the anniversary of Route 91 rolled around, she was better equipped to handle the triggers and emotions that came up.

We invite anyone to join us for equine therapy. It is a unique and powerful experience that is becoming more and more recognized as an effective option for therapy. I have seen it firsthand; it truly is incredible.

Click here to learn more about the equine therapy program at Mariposa.

Mariposa is a counseling center where women and families can address the challenges that keep them from leading productive, fulfilling, and healthy lives.

Blending innovative techniques and gender-specific care, Mariposa treats over 3,000 individuals each year and is an expert in a wide range of issues involving mental health, substance abuse, violence, and trauma. Click here to visit our website.